HANCOCK — After campaigning for local and national political candidates for nearly 15 years, a local attorney has launched his own campaign for the first time.

Michael F. Case of Washington — the only Republican to announce his candidacy so far — is the third person in the contest wanting to represent the 2nd Berkshire District.

Others could still enter the race for 2nd Berkshire, one of the largest House districts in the state covering 22 cities and towns including Hancock, Dalton, Washington, Lanesborough, Cheshire and Ward 1B in Pittsfield. Candidates have until May 25 to file their nomination papers with Secretary of State William F. Galvin for certification.

While Mark has never held public office before, the Boston native has been involved in the political arena since the mid-1990s by working on campaigns ranging from municipal to presidential elections, according to a news statement announcing his candidacy.

“I’ve been working toward something for as long as I can remember, and that something has always been helping others to succeed,” he said in the news statement.

Mark’s inaugural run for office is focusing on economic stability. “The current economy has affected many people in our district and throughout the Commonwealth. Many important decisions must be made in the near future,” he said. “Our next representative must find ways which allow people to hold meaningful employment, take full advantage of a good education, and improve their general quality of life.”

Mark has spent the past 10 years working for Verizon as a member of the International Brotherhood of Electrical Workers. He’s served on the executive boards of IBEW Locals 2324 and 2325, and as a delegate to the Central Labor Council and state AFL-CIO Convention.

While working for Verizon, Mark graduated from Suffolk University Law School and also received his doctorate in law and policy from Northeastern University. He became a licensed attorney in Massachusetts two months ago and is currently establishing a local law practice.

Mark believes he has the experience and passion to effectively represent the 2nd Berkshire District.

“When I am elected, my priority will be to make sure everyone has the same opportunity to achieve and succeed,” Mark said. “I think my background, my willingness to listen, and my ability to learn quickly will allow me to be the effective representative we need.”

He added, “This is no time for impatience or misdirected frustration; it is time for real solutions and real ideas that are going to benefit everyone.”

Mark and his wife Cassandra, who have no children, reside at 7 Theresa Ave. in Hancock. 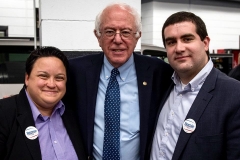