“It’s time for a young, energetic representative who’s come from a
working class family, and who can articulate what needs to be done to
help the working people of the commonwealth,” said Local 404 President
Frank A. Rossi. “Paul is up for the challenge, and we look forward to
working with him.”

“I’m proud to stand alongside nurses and support legislation that will
help stem violence in their workplace, ensure safe staffing levels,
and attain universal health coverage through a single payer system,”
said Mark, a Hancock attorney, one of three Democratic candidates
vying to replace Rep. Denis Guyer in the Sept. 14 primary election.

As an active member in the electrical workers union, he has the
support of the I.B.E.W. telephone and electrician locals. 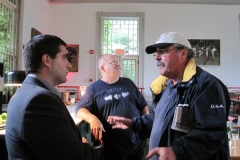