Teamsters Local 404 is the western Massachusetts truckers’ union, and
includes many other fields, such as police officers, ambulance
workers, and nurses. Workers come from both the private and public
sectors at worksites including United Parcel Service, IBC bakery,
Berkshire Regional Transportation Authority, and various Departments
of Public Works.

“It’s time for a young energetic representative who’s come from a
working class family, and who can articulate what needs to be done to
help the working people of the Commonwealth,” said Local 404 President
Frank A. Rossi. “Paul is up for the challenge, and we look forward to
working with him.”

The Mass Nurses Association, which is the largest health care union in
the state, represents 17,000 members in 80 health care facilities.

“I’m proud to stand alongside nurses and support legislation that will
help stem violence in their workplace, ensure safe staffing levels,
and attain universal health coverage through a single payer system,”
said Paul upon receiving the MNA’s endorsement.

“Paul Mark has the support of these groups because of his record of
working hard for working people, and his commitment to issues that are
important to people’s everyday lives,” said campaign spokesman Steve
Hoeschele.

Last month, Paul received the coveted endorsement of MassAlliance, a
coalition composed of 22 progressive groups. The organization’s member
groups include state chapters of Sierra Club, the National Association
of Social Workers, the National Organization for Women and the
Massachusetts Teachers Association, among others.

As an active member in the electrical workers union, he has the full
support of the I.B.E.W. telephone and electrician locals. 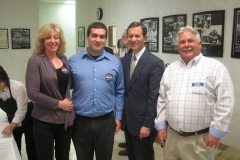