Many rural Verizon phone customers in western Massachusetts are fed up with lousy service from the telco giant. And because Verizon has a monopoly in the rural regions, residents can’t take their business elsewhere. But angry phone customers might be getting some relief in the near future from the Massachusetts Department of Telecommunication and Cable (DTC). The state agency, which oversees phone service in the state, launched an investigation into Verizon’s service last June. The investigation was triggered by dozens of complaints from citizens throughout the 4 western Massachusetts counties. If the DTC determines Verizon is neglecting its responsibilities to its customers, it can step in and require Verizon to fix its problems.

One complainant, Jane Williams from New Salem, writes, “I can not tell you the the struggles that we have had with losing connection due to compromised phone lines and the disadvantage of which this puts our entire family. My children have struggled to keep a competitive edge in school without equal access to the internet.” Williams’ letter, along with 69 other complaint letters, can be viewed online at the DTC’s website.

Angry consumers are not alone in their fight, though. The International Brotherhood of Electrical Workers (IBEW), Local 2324, has decided to take an active role in the DTC’s investigation as an “intervener,” and is providing the state agency with evidence to try to show that Verizon is providing sub-par service to rural customers. The union, based in Springfield, MA represents several hundred Verizon telephone workers in the western Massachusetts. The Attorney General is also acting as an intervener in the DTC’s investigation as well.

Local 2324 Rallies at Wednesday’s Hearing
Part of the DTC’s investigation includes a series of hearings across the region to collect evidence and comments from customers and other interested parties. One such hearing was held Wednesday morning at the Northampton, MA city council chambers. IBEW Local 2324 held a small rally before the hearing in front of City Hall, attracting the attention of local media and passerbys. Business Manger, John Rowley, the chief executive officer for the union said that “We are not here to be anti-Verizon, but pro-consumer.” Rowley was joined by about a dozen IBEW members and a small handful of other supporters. Paul Mark, an IBEW Local 2325 member and also a candidate for Berkshire’s 2nd Massachusetts House Seat, said that “[Verizon] is not reinvesting in the telephone lines. They are sacrificing service for profit.” The rally was endorsed by the Pioneer Valley, Berkshire, and Hampshire/Franklin labor councils as well.

A spokesman for Verizon, Phil Santoro, watching the rally from a distance, told Mass Labor News that Verizon’s position was that “Service quality in Western Massachusetts has been good, the evidence is in the service quality metrics. These complaints are normal.”

While it remains to be seen if the DTC will agree with Verizon on the definition of “normal,” it’s clear that at least some customers have been extremely inconvenienced by the company. One Verizon customer, Aron Goldman, Shutesbury, started his testimony at the hearing by saying that “Regular residents in Western Massachusetts, with very few exceptions, cannot stand Verizon. The quality of service could not be worse.”

Verizon customers can file complaints with the DTC using their online complaint form. 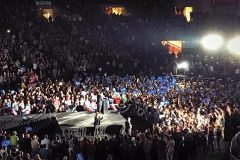