WILLIAMSTOWN — On a brisk spring morning, Gail Cariddi stands alone in the shadow of the town’s post office, at the nascent stages of a nearly yearlong journey.

Armed with business cards, pens and a folder, she approaches strangers walking by, apprehension strewn across their faces, and asks: “Excuse me, are you a registered voter here in town?”

And with that, Cariddi, a 20-year veteran of the North Adams City Council who works for her family’s wholesale business, expounds upon her campaign to be elected in the 1st Berkshire District, gets a signature, and moves on to the next passer-by.

“This is my job right now,” said Cariddi, 56. “My job is to be the next state representative in the 1st District, and I’m going to do everything I can to do my job.”

Cariddi is one of 12 locals seeking to represent Berkshire County on Beacon Hill next year. And with vacant seats and contested races all the way up to the governor’s office, candidates and supporters already are laying the groundwork for a campaign season that could reshape the political landscape in the county and state even though most people won’t pay close attention until a month before the Nov. 2 general election.

Cariddi, a Democrat, is running against Ed MacDonald and David Bissaillon, two Democrats from Adams, in hopes of filling the seat that will be vacated by Daniel Bosley, who after 24 years as a state representative is retiring from the position to run against Thomas Bowler for county sheriff

While candidates such as Cariddi are seeking to supplant a retiring member of their party, others are running because they aren’t content with the governing on Beacon Hill.

“Frustration, more than anything else,” said Republican Michael Case, a former Pittsfield police officer. “We can do better.”

Case is running for state representative in the 2nd Berkshire District, where Denis Guyer is stepping down after six years of representing the 22-town district.

“The overarching sentiment now is this climate of insecurity,” said state Sen. Ben Downing, D-Pittsfield, who is running unopposed for the position. “People are unsure about whether or not their job is secure and if their personal economic picture is stable.”

Downing, who is seeking his third term as a state senator, said the key to understanding one’s constituents, regardless of the economic climate, is by meeting people where they’re comfortable.

That means a lot of spaghetti dinners, fundraisers, shaking hands at a supermarket, or simply going door-to-door. And all that adds up to 40 to 60 hours a week of getting the word out about a candidate’s aspirations for state office.

“You have to be willing to go nonstop,” said Paul Mark, a Hancock resident who services phones, is a licensed attorney, and is running for Guyer’s seat.

Mark, who has worked on other campaigns in the past, said the difference between supporting a candidate and being a candidate is that the responsibilities of the campaign fall squarely on the candidate.

He emphasized that running for office has built-in pressures.

Patrick, who ran as an outsider and grass-roots organizer in 2006, officially kicked off his campaign last month, spending a weekend visiting 22 events in 18 municipalities across the state.

His camp is seeking to follow the grass-roots path again, attempting to recruit 21,700 organizers to find 50 people apiece to vote for him — amassing enough votes to win regardless of the number of candidates in the race.

Sydney Asbury, Patrick’s campaign manager, said the goal is to compete in all sectors of the state by getting the governor out in public and keeping organizers informed of the issues.

“Everything that we’re doing as a campaign is toward giving people an opportunity not only to meet the governor, but to push back against people in the field,” Asbury said.

Rick Gorka, Baker’s press secretary, agreed that the race will come down to the man who currently holds the office.

“Ultimately, this is an election about Deval Patrick and who is the best person suited to reform Beacon Hill and regain some fiscal sanity,” Gorka said.

Despite the Democrats’ dominance in recent election cycles, the Baker campaign and the rest of the state’s Republicans say the party is becoming re-energized in the wake of ire over health care, taxes and jobs, as well as amid positive signs from the election of U.S. Sen. Scott Brown in January.

“Sen. Brown’s election was a fantastic example of how things are changing in Massachusetts,” said Jennifer Nassour, Massachusetts Republican Party chair. “He was able to outwork his opponent [Democrat Martha Coakley]. He was able to connect with people in a different way.”

Nassour said the party already had 75 candidates for state office, compared with only 60 in 2008.

Building on that momentum for the fall is key, according to Matthew Kerwood, Richmond town administrator and a superdelegate for Baker at April’s state Republican Convention.

“It’s important from our perspective, and from really any campaign, that you use the time that you have before voters start paying attention to lay the ground work, to get the message out so that when that day in September or October comes, you kind of build on it,” Kerwood said.

Lee Harrison, president of Berkshire Brigades, joked that for campaign supporters, politics — not golf — is their hobby. And though it’s still early, he expects another wild ride this year.

“It becomes all-consuming,” Harrison said. “Not as much as in a presidential year, but it’s going to be a crazy summer — no doubt about it.” 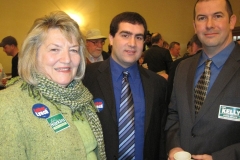