“Paul is a hard-working, intelligent person from a working class background who would make a fine state representative,” said Rosenberg. He said Mark has the energy to represent his sprawling district—the largest in the state. Rosenberg also commended Mark for his understanding of the issues that face his rural district, from regional school district funding to innovation in agriculture and energy.

“As a fellow graduate of UMass-Amherst, Paul shares my dedication for supporting higher education,” Rosenberg said, “and it’s reflected in his endorsements from various educator groups.” Mark received his masters in labor studies from the University, along with a doctorate in law and policy from Northeastern University. “He’s clearly got the right qualifications for the job,” Rosenberg added.

“I’m excited to have the support of Senator Rosenberg, and I believe we would be natural allies in crafting policy that will benefit our shared districts,” said Mark upon receiving the endorsement. “I especially aspire to mirror his advocacy on behalf of farmers in the State House.” 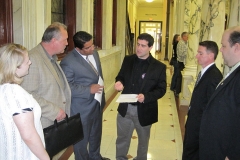