Hancock resident Paul Mark filed papers on Friday to enter the race to succeed Denis Guyer as State Representative for the 2nd Berkshire District.  Paul Mark is entering the race as a Democrat and will vie for the Party’s nomination in the Primary Election this September.  This is his first time seeking elected public office.

There are a number of issues which Paul Mark wants to address as State Representative.  “The current economy has affected many people in our district and throughout the Commonwealth. Many important decisions must be made in the near future,” he said. “This is no time for impatience or misdirected frustration; it is time for real solutions and real ideas that are going to benefit everyone.”

Paul Mark believes he will bring the right balance of experience and passion to effectively represent the 2nd Berkshire District. “I’ve been working towards something for as long as I can remember, and that something has always been helping others to succeed,” he said, “Our next Representative must find ways which allow people to hold meaningful employment, take full advantage of a good education, and improve their general quality of life.” Dr. Mark continued, “When I am elected, my priority will be to make sure everyone has the same opportunity to achieve and succeed.”  He concluded, “I think my background, my willingness to listen, and my ability to learn quickly will allow me to be the effective Representative we need.”

A graduate of Suffolk University Law School, Paul Mark is an Attorney licensed to practice in Massachusetts. He also received his Doctorate in Law and Policy from Northeastern University.  He pursued his education while working full-time for the past ten years at Verizon as a member of the International Brotherhood of Electrical Workers.  Dr. Mark has served on the Executive Boards of IBEW Locals 2324 and 2325, and as a delegate to the Central Labor Council and State AFL-CIO Convention.  He has been involved in the political arena since the mid 1990’s, performing a number of roles on campaigns ranging from municipal to presidential elections.  He is currently organizing a Democratic Town Committee for the Town of Hancock. 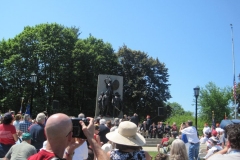