Mark organized Tuesday night’s caucus to form a new Committee in Hancock and elect a delegate to the party’s state convention in June.

Seven Hancock voters showed up to the town hall, which beat the caucus turnout of many existing local committees in larger communities.

Mark, an organizer for the IBEW Electrical Workers union, was elected unanimously to run the new committee. He was also chosen to represent the town at the convention.

“I look forward to organizing other active voters to help elect Democrats here in Hancock and across Western Mass,” Mark said. “Now Hancock has a voice within the party, and I hope voters will elect me to be the voice of the 2nd Berkshire district in the State House as well.”

The large, rural district runs from the New York state line to the corner of New Hampshire, spanning parts of Berkshire, Franklin and Hampshire counties. It encompasses 22 towns, including Northfield, Shelburne Falls, Dalton and one precinct in Pittsfield.

The committee elected Paul’s wife Cassandra as the committee’s Secretary and as an alternate delegate to the state convention. 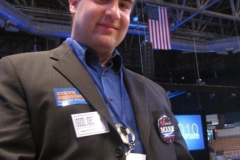